How to Adapt to Change, Embrace Chaos, and Make Your Business Thrive 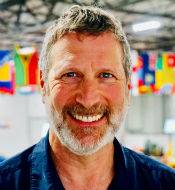 We work in a time of increasingly rapid change. Businesses of all sizes and in all industries crave proven models for achieving growth in an environment of uncertainty. I will reveal five key strategies that attendees can use to lead their company to success in a continuously and rapidly changing environment. These strategies can be applied in any business or organization, at all organizational levels and functional areas.

This presentation will give business leaders insight into the success strategy that enabled Direct Relief to become a global leader in a rapidly changing world, acclaimed as an innovator, with a business model that hasn’t changed in 71 years.

Direct Relief’s experience proves the business value of long-term relationships, leverage  of  incorporating five key concepts: a) relationships matter, b) leverage resources of all types, c) listen to customers and stakeholders, d) acceptance of uncertainty and change, e) be purpose driven (and your purpose needs to be more than making money or providing a return to shareholders).

With prior work experience in law, the judiciary, financial services, and business, Dean joined Direct Relief in 2016. Before moving to Santa Barbara, in 2013, Dean was a senior manager for the U.S. Bankruptcy Court, where he led court operations in Tucson and Yuma through a period of rapid growth during the Great Recession. Prior to his tenure at the Bankruptcy Court, Dean provided legal counsel, strategic planning, and change management services to individuals and small businesses. Dean’s greatest achievements are the loving marriage he has built with his wife, Constance, and the two grown daughters they have raised, whose own successes are a source of enormous parental pride.

Dean earned an MBA and law degree from the University of Arizona, and a BA in English from Boston University. He is the president of the Rotary Club of Santa Barbara and has served on the Development and Marketing Committee of the Anti-Defamation League (ADL) Santa Barbara chapter. He volunteers with Partners In Education and Women’s Economic Ventures, and he coached the Santa Barbara County champion Dos Pueblos High School mock trial team.

Direct Relief is a humanitarian organization committed to improving the health and lives of people affected by poverty or emergencies. Headquartered in Santa Barbara, California, Direct Relief delivers lifesaving medical resources throughout the world to communities in need—without regard to politics, religion, or ability to pay. Direct Relief earns a perfect 100%  Four-Star rating from Charity Navigator. Fast Company has named Direct Relief in the top three most innovative not-for-profit companies. CNBC ranked Direct Relief number one in its list of the top 10 charities changing the world.