How to Use Video to Grow Your Business 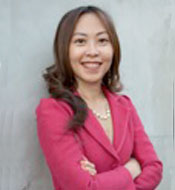 During this presentation you will learn why video is so important for small business, the pros and cons, and the most effective way to use it to tell your story. Throughout the presentation there will be lots of examples, along with an exercise to get your creative juices flowing. So come prepared to learn how to leverage this powerful media and become a "rock star" on camera.

By Attending You Will Learn:

DuckPunk has won many awards for their work, such as the Clio, Addy, Telly, and many others from film festivals across the country. DuckPunk’s clients include Nissan, Verizon, Wells Fargo, and CBS, to name a few. DuckPunk’s most important campaign to date is a series of anti-smoking spots for the California Department of Health. The campaign consisted of 4 spots, produced in six different languages. It won a Clio and Addy Award and raised their 1-800hotline calls by 70%.

Besides producing and directing, Ms. Tong is also a public speaker and an on-camera coach. She has held classes for SoCalGas, various chambers of commerce and trade organizations. Her most sought-after seminars, “How to be a Rock Star On-Camera” and “Finding, Speaking and Marketing Your Big Why™,” have garnered rave reviews from participants.

Before founding DuckPunk, Ms. Tong was a News Anchor/Reporter/Producer at the International Channel in Los Angeles, one of the first satellite TV stations in the US. Aside from anchoring the news, she also had a 5 min. human interest segment every day, where she covered everything from beauty, technology, health, medical, to movie premieres and Star Trek Conventions. She has interviewed thousands of people from all walks of life and covered over 1200 stories during her four years at the station.

Aside from work-for-hire, Ms. Tong also participates in philanthropic projects. She was in Africa last March shooting a documentary project for Wells Bring Hope, a non-profit that drills wells in Niger, West Africa.

Ms. Tong is an MFA graduate from the California Institute of the Arts. She was born and raised in Hong Kong before moving to the US in 1991. Ms. Tong is passionate about women and social justice issues. She currently sits on the board for Vision of Health, a non-profit mobile mammogram program for underprivileged women.

Ms. Tong firmly believes in this mantra, a quote by Pablo Picasso: “The meaning of life is to find your gift. The purpose of life is to give it away.”