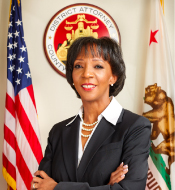 As Chair of the Criminal Justice Mental Health Project, District Attorney Lacey leads a multidisciplinary working group devoted to diverting people who are mentally ill out of the Criminal Justice System for non-violent offenses and directing them to where they can receive the help they need. Her plan received an award from the State of California and was held up as a model for the entire State.

During this program, Los Angeles District Attorney Jackie Lacey will share her personal story, along with the mental health “Blueprint for Change” initiative.

Jackie Lacey is an American politician who has served as the District Attorney of Los Angeles County since December 3, 2012. Lacey is the first woman, and first African-American, to serve as LA District Attorney since the office was created in 1850.

Lacey was born in Los Angeles and raised in the Crenshaw neighborhood. Her father, Louis Phillips, was a City of Los Angeles Lot Cleaning employee, and her mother, Addie Phillips, was a garment factory worker. Lacey attended Dorsey High School, graduated from the University of California, Irvine with a degree in psychology in 1979, and graduated from the University of Southern California Law School in 1982.